I have now moved to another country again and this time it was to return to my home country, Sweden. In 2014, I wrote a blog post about my experience moving from Sweden to Canada, and now I have done the opposite. This means that I have once again gone through, or am going through, the things that you need to take care of when moving to another country.

As I said then, it’s not the easiest to move to another country. A lot of preparations must be made and there are many changes to get used to. One thing I did not need this time, since I moved back to my home country, was to get a visa or permit. All I had to do was go to Skatteverket (the Swedish Tax Agency) and tell them that I’ve moved back to Sweden so they register me as living in Sweden again in the population registration. For my boyfriend, it’s not as easy though. He has however found a job in Sweden already, which is great, but before he can start working he needs a work permit. He applied in October and the wait time is 1-3 months. I hope that Migrationsverket (the Swedish immigration agency) will be in touch soon! It’s really a hassle getting a visa or work permit in Sweden nowadays, so if you’re planning on moving here, do your homework first! Sweden is great but it’s not the easiest country to immigrate to.

Another thing I had to take care of before moving was the shipping of my personal belongings. Basically, all my stuff was in Canada, since I’ve been living there since 2014, so I had to find a shipping company in Montreal and arrange for first storage and then shipping from Montreal to Stockholm (storage first because I left Montreal in the beginning of July but didn’t arrive in Sweden until the beginning of October, and shipping by boat only takes 3-4 weeks). One thing I really recommend when you’re doing a big move like this is to do some research first. Contact many different companies, see how helpful and responsive they are, what services they offer, and what the cost is. I wanted to be sure when moving all my personal belongings from one country to another. It’s a big deal and I did not want to risk anything going wrong. Fortunately, I found a great shipping company: Go Transport Canada. If you’re moving from or within Canada, I can really recommend them! The general manager, Dimitri Donas, was great and so helpful during the whole process. My stuff arrived without any problems in mid-October. Then, I handled the customs process in Sweden myself, so I wouldn’t have to pay extra for an agent to do that. It wasn’t too complicated, it just took some time to fill out all the necessary documents (I called Tullverket, the Swedish customs, before my stuff arrived and they were very helpful and gave me all the information that I needed). Then, when my stuff had arrived in Stockholm, I just went to the customs first with my papers, waited a bit and then I got the paper I needed to bring with me to pick up all of my belongings at the terminal. I didn’t even have to pay anything for the customs (since it was all personal belongings).

One very important thing to take care of when moving to another country, which can be a big hassle, is accomodation. I have now moved to Stockholm, where it is very difficult finding a place to stay. Fortunately, I have a very helpful family and friends, and especially my dad has helped me a lot with finding somewhere to live in Stockholm. I am very fortunate that way! Otherwise, if you’re having trouble finding accomodation in Sweden, and you don’t want to buy anything right away, I recommend that you look at Blocket or housing groups on Facebook.

Some other things to take care of when you move is:

Getting a job (or if you’re studying, you at least don’t have to go through this.). Job hunting  is so tiresome and I have already written some posts about my experience of job hunting in Stockholm. Fortunately, I found a job after 1-2 months and have my first day tomorrow, I can’t wait! There are many different job sites in Sweden where you can look for a job, I have visited many of them, and there are also good groups for finding jobs on Facebook nowadays. One thing that helps in finding a job in Sweden is of course speaking Swedish, but many can get by with just English here. So don’t be discouraged if you move to Sweden and you don’t speak Swedish yet. Chances are you will still find a job. If you need to know Swedish or not really depends on the domain you want to work in.

Buying insurance. I am covered by the general insurance in Sweden, that we pay for with our taxes, being a Swedish citizen and all. However, it can be good to have an accident insurance as well, so you’re well taken care of, financially, if you have an accident. But it’s really a jungle out there, with all the insurances that exist, that cover pretty much the same stuff, but they all have some slight differences and differeny prices. Also, should you only have an insurance that covers accidents or one that also covers and takes care of you if you get seriously ill? Not an easy decision… I have done so much research and created lists and Excel spreadsheets, and soon I have to make a decision. At least this is in my home country and all the information is available in my first language. When you’re moving to another country where you’re not familiar with these things nor the language, this part can be very tricky. My advice then is to get some help, contact all insurance companies and ask them for all the information that you need. However, always shop around until you find one that suits your wants and (possible) needs (you don’t really need insurance until the accident has happened, right?), and compare the prices.  Another insurance you may need is a home insurance. Fortunately, I don’t need to look into this now, since there’s already a home insurance where I live, that’s included in the rent. But when I will need to buy one myself, I will do the same thing as I have done for the accident insurance – gather all the information and compare it before making a decision.

Finding a mobile service provider. This was a hassle to get done here in Sweden actually, because I had to get a Swedish phone number right away (since I was applying for jobs in Stockholm) but I couldn’t sign up for a phone subscription without a Swedish personal identity number (which is like a social insurance number). However, I had been to Skatteverket for this just the day before but it took 1-2 weeks before I was registered in the population registration again. This was very annoying. My dad actually had to get the phone subscription for me, in his name, and then we had to transfer it over to me. Apparently, this was perfectly alright with the service provider. Just a hassle for me though…

Transferring money. You might want to transfer money from your country of origin, since you you might need it in the country you’ve moved to (until you start making some money there). However, this can come with a big fee. When you transfer from bank to bank (in different countries), there’s always a fee to pay which can become quite high unless you’re being careful. My boyfriend has helped me with the research here and has found something called TransferWise which seems to be good. It doesn’t seem like it’s too complicated to use and the fees aren’t too bad, so when I want to make a transfer from Canada to Sweden, I think I might use them. When I moved from Sweden to Canada, I just transferred from bank to bank, without using something like TransferWise, but I think I ended up paying a big fee for that. So we’ll see how it goes, this is another thing that must be taken care off eventually.

Something I didn’t have to fix, but that someone else moving to another country might have to, is a social insurance number (I think you can only get this after you have your visa or permit though). In Sweden it’s called a “personal identity number” and you get it via Skatteverket.

Another thing that you probably have to take care of when moving to another country is opening up a bank account. This is another jungle to tackle since there are so many banks to choose from. What I recommend is that you do what I have done for the insurance part – gather all the information and compare the different banks. See what bank accounts and services they offer and what the cost is and so forth. This can be perceived as another difficult decision and it can be a hassle to get through, setting this up in another country. However, when I did it in Canada it wasn’t too complicated, the people at the bank were very helpful.

This is everything that I can think of right now, things that I have had to take care of before and after moving. Maybe this can help you if you’re thinking of moving to another country, because trust me, there’s a bunch of things to take care of and learn when you do. However, it’s not only a hassle moving abroad , it also comes with many positive things and it’s a great adventure. Once you get through the first schock of being in a new and different country, and once you’ve taken care of all the necessary less fun stuff,  you might end up having a great adventure which will give you great memories for life.

As I’ve said before when it comes to this, if there’s anything you would like to know, don’t hesitate to ask! Send me a comment and I’ll be happy to respond and help you in any way that I can.

Moving to another country may seem tough and that it requires a lot of work, but it might really be worth it, it has for me at least! 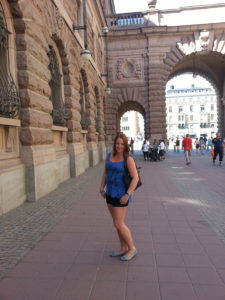 In Stockholm, July 2014
(I had no idea here that I would be moving to Stockholm 4 years later!)